The average salary on Malta is EUR 18,643 in 2018, according to the National Statistics Office – Malta. Annual average basic salaries differ among industries, the highest one was in the sector of Financial and Insurance activities, while the lowest is in the “elementary occupation” – EUR 12.922.

Malta is an emerging economy and salaries are rising continuously. Some professionals on Malta can earn impressive salaries, like for example UX/UI designers who earn more than EUR 36 K, or Project managers with an average wage of + 144 K euros.

Bonuses and benefits for workers on Malta

In Malta, employees in general receive so called “statutory bonus” which is a type of quarterly payment on top of the wage. In the last year they have amounted around 500 euros annually. Currently, the full statuary bonus payable every six months is EUR 135.10. Please advise the page of Department for Industrial and Employment relations for more details.  Most of the companies also pay small living allowance, which was during last year less than two euros a week.

What Malta makes especially attractive for prospective jobseekers are the costs of living, which are lower than in the other developed European countries and nice climate. Having previous in mind Malta can offer very good living standard.

What is the minimum wage on Malta?

Department for Industrial and Employment relations determines minimum wage on Malta. For 2018 the national minimum was EUR 172.51, in line with National Agreement on the Minimum Wage signed by the Social Partners.

Based on the Jobsplus data for May 2018 in total 1.791 persons have been unemployed. Comparing to the last year the number of unemployed has dropped for almost 29%. This makes the Malta one of the countries with lowest unemployment rate, with unemployment rate around 4%.

What are the average salaries on Malta by industries?

Most of the workers on Malta work in wholesale and retail, accommodation and food services and in the public administration, however their salaries are on the level of average or below. As we mentioned above, highest salaries are in the sector of Financial and Insurance activities – EUR 26,000. Please advise the table below for detailed overview of average salary on Malta by the industry. 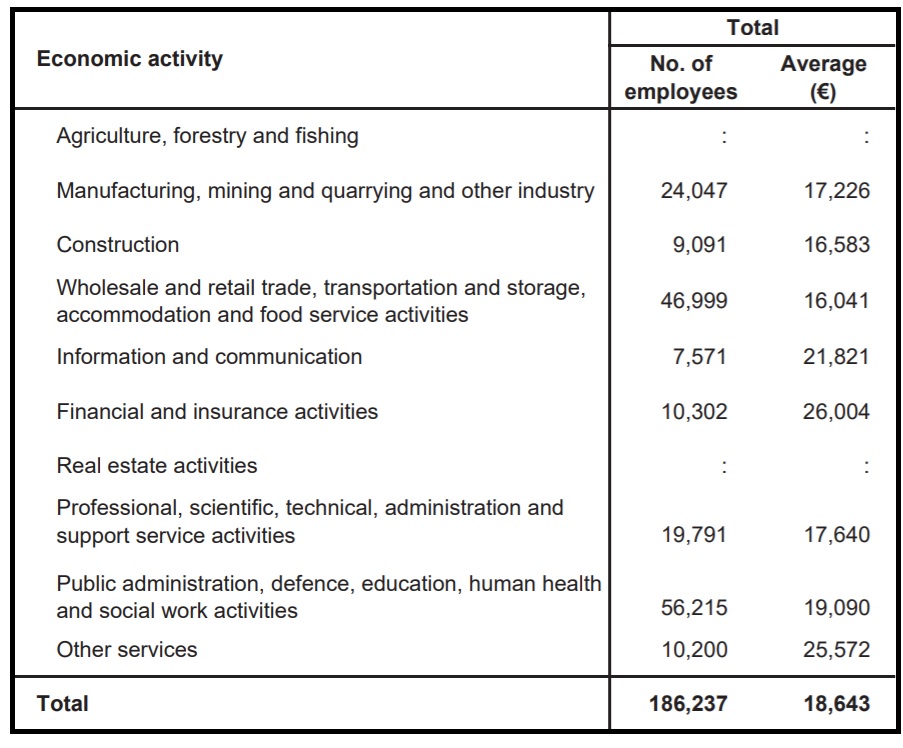 When it comes to the occupations and particular professions, Managers earn the best (EUR 34,535 per annum) and Professionals (EUR 24,161). On the bottom of the table we can find plant and machine operators, assemblers and elementary occupations (between 13 and 15 thousand euros). Please advise the table below for detailed overview of average salary on Malta by the particular occupational groups.